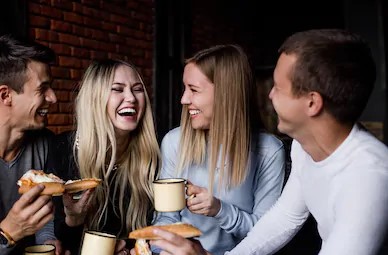 Some people are naturals at socializing, seemingly effortlessly interacting with other humans in a relaxed yet professional manner. Some people can socialize when forced, yet others hide behind the silk plant at office meet-and-greets and pray no one finds them. However, there are ways to improve your socializing. Here are six ways to be more social.

One mental health blogger credits the Animal Crossing series of video games with helping her learn to set limits and read facial expressions and body language. For example, in Animal Crossing: Wild World for the Nintendo 3DS, there is a character named Dr. Shrunk who shows you what different facial expressions mean. Characters also react with body language, such as smiling and singing when you agree to a request or having steam come out of their ears and stomping when you upset them. And it is easy to upset the anthropomorphic animals in your village. The animals will constantly request favors, not all of which are easy to complete, and do things such as ask to come over to your house at a certain time (in real time) or buy your furniture. You have to set limits quickly and deal with the fallout. The video game provides a safe environment to practice that.

If you want to practice your conversation skills, try practicing on customer service professionals. They are paid to be nice, and many of them love to talk. Timing is important--don't ask a waitress something during the dinner rush. But other than that, it's open to anything. For example, you might ask a barista "What type of milk makes the best mocha latte?" We all know what icebreaker questions are, and they're useful in practicing your conversation skills if you can't think of any questions of your own. But asking your own original, but relevant questions, gives you an advantage in that you're interested in the topic being discussed--a freelance writer based in Indianapolis is fond of asking bartenders what the worst pick-up line they've ever heard is.

Every human being has at least one thing in common with every other human being out there. The trick is to find common interests and discuss them. This can be something as bland as the weather or latest in high school basketball or something as offbeat as the history of the Konami code. Use your environment to think of questions. For example, if you're at a high school reunion, ask what the most useful class was. If you're in a video game bar, ask what space flight simulation has the best plot (your answer is likely to be the Wing Commander series or Star Wars: TIE Fighter). If you're at a work-related function, ask your co-worker what they think is the strangest thing they've seen a coworker do (several upper-level Burger King managers had an "incident" involving walking barefoot over hot coals). Find common interests, and ask questions about the answers you get. You'll get better at this with practice.

4) Show interest in the other person.

Make eye contact when you're talking to the other person, or show some other way you are listening to what they are saying. Lean slightly forward. Nod yes or shake your head no. Make comments such as "I see." Ask more questions--remember what journalists call "the Five Ws"--who, what, where, when, why, how. If the person says something that strokes your curiosity, ask. You might learn something as interesting as the fact that Frank Perdue (yes, the turkey magnate) hated turkey. Dale Carnegie wrote that there was no sweeter sound to another person than their own name--use it and show genuine interest in the other person.

Your mother was right--don't discuss religion and politics in polite company. The reason why is that these are topics close to people's hearts, and you can easily hurt someone's feelings and cause them to clam up. Instead of these two hot-button issues, discuss things such as pets, family members, favorite foods, and so on. Even two polar opposites can find common ground and have a civil discussion based on that.

This may seem to be contrary to point number five, but discussing current events does not have to be an argument. There is plenty of news that is safe to discuss. For example, one popular subject, especially in smaller towns, is the crime page, especially if there's something gloriously stupid involved. An example--in Zionsville, Indiana, two bank tellers conspired to prank a third by making it look like the bank had been robbed prior to opening--the police, the FBI, and their boss did not see the humor in the situation, which not only made it all over town but went viral on a "Bonehead of the Day" website. Another incident, this one in Valdosta, Georgia, involved a woman calling the police to report the theft of two bags of rock cocaine. The more informed you are, the more you can discuss--so read!

You are capable of improving your conversation and socializing skills by using these six pieces of advice. Find what works for you, and practice it every day!